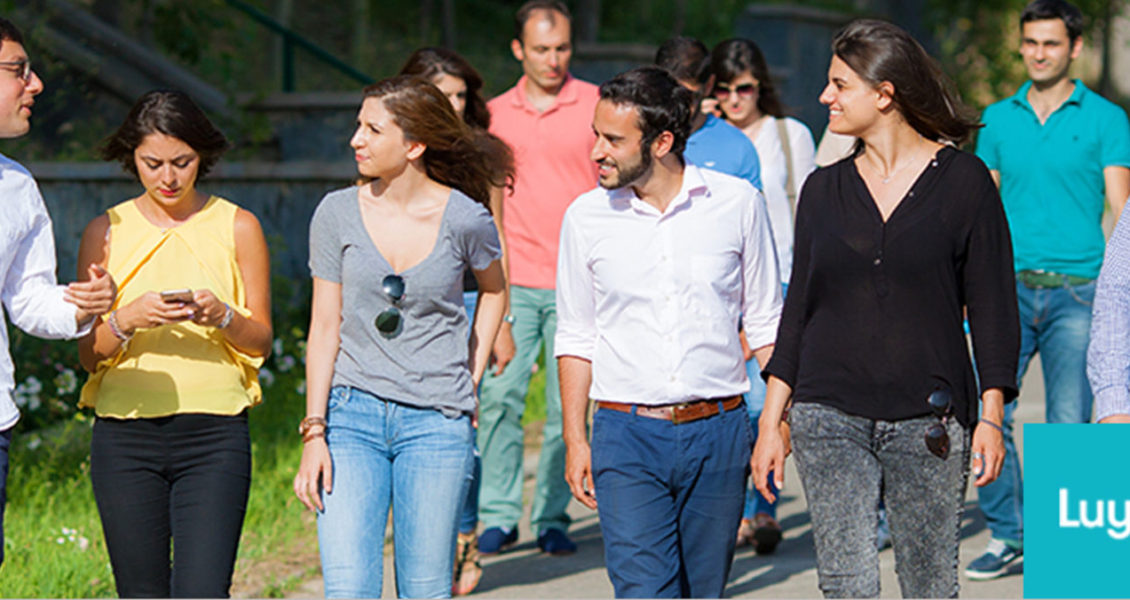 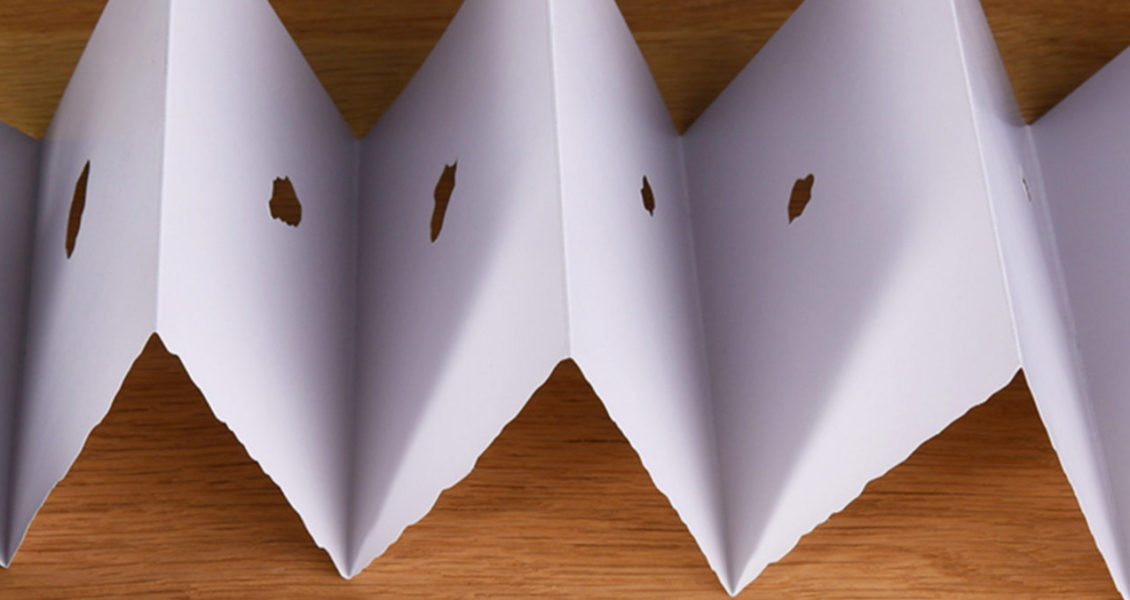 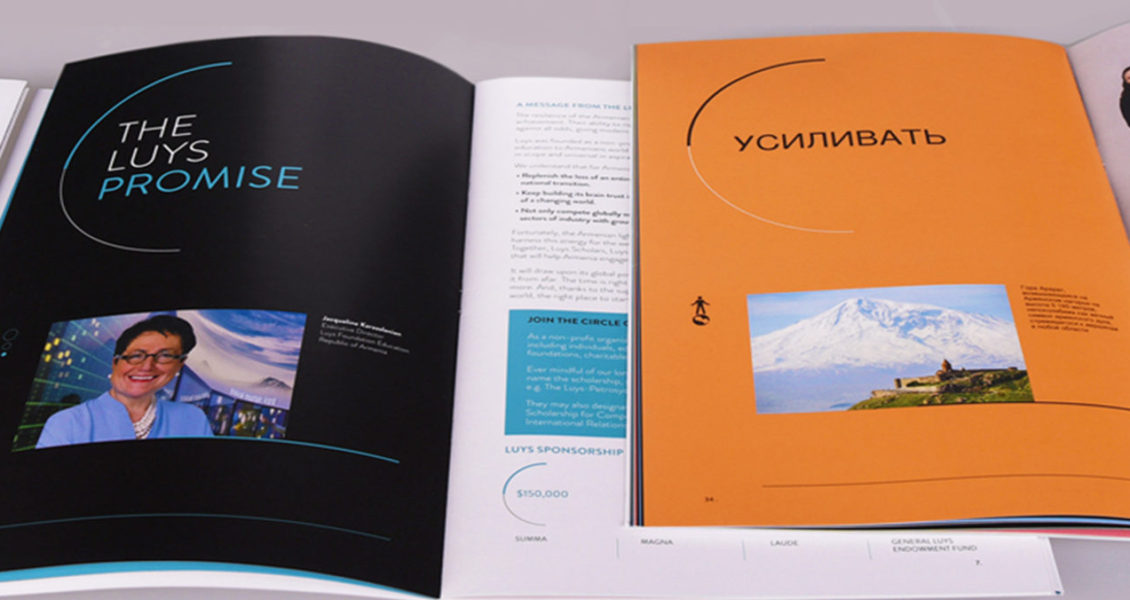 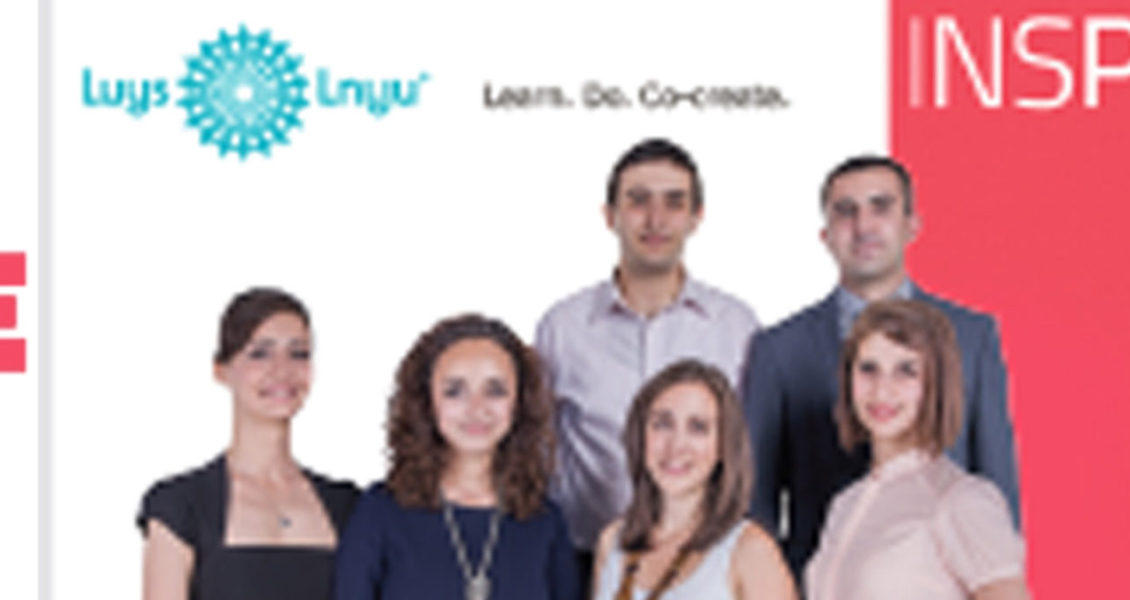 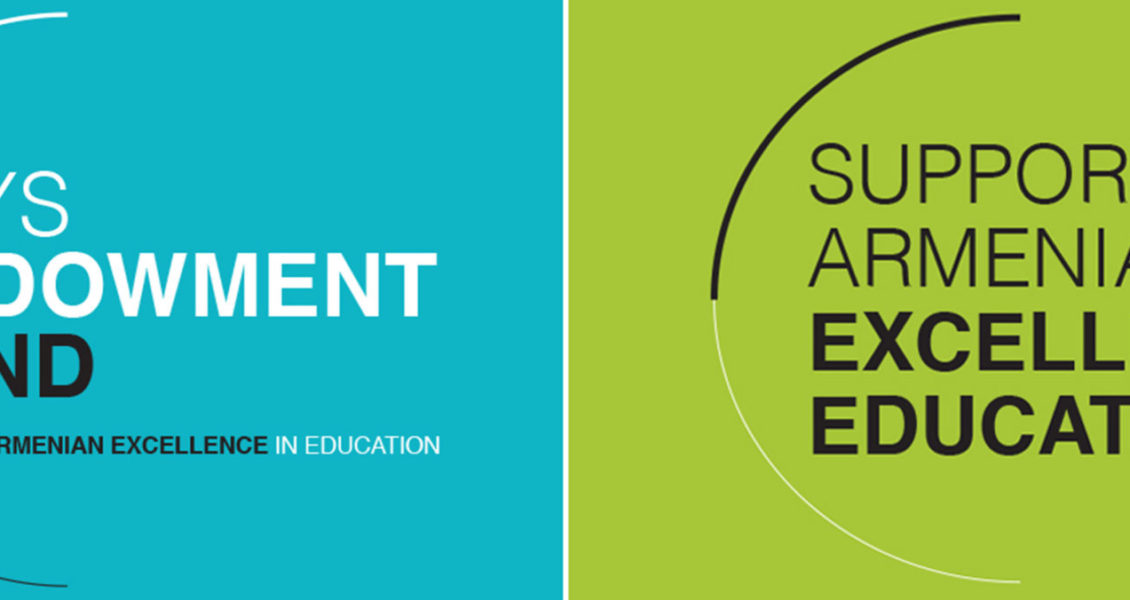 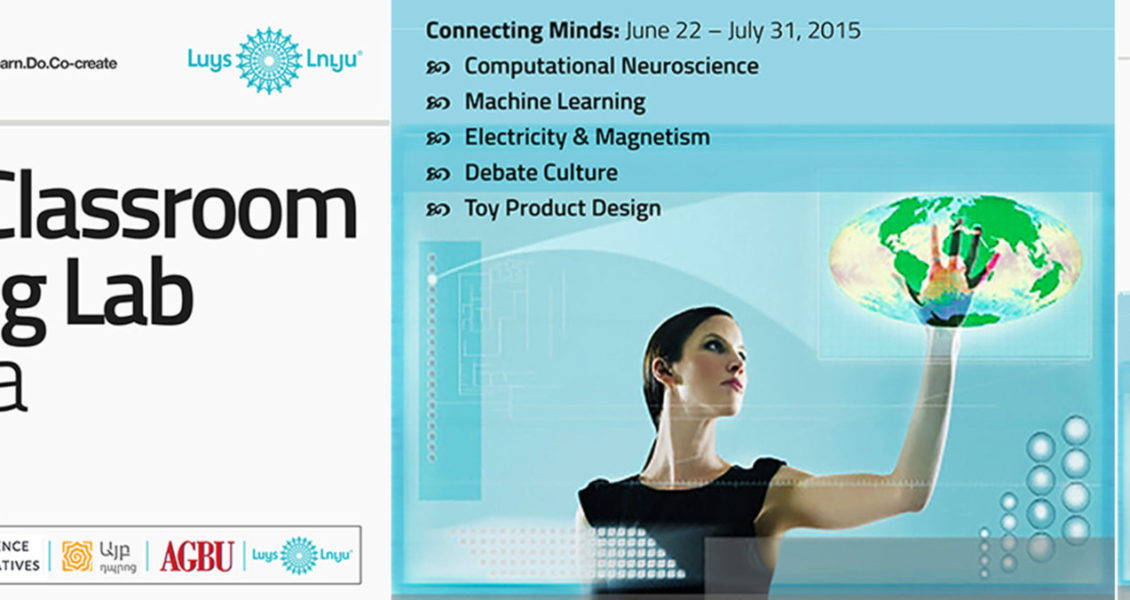 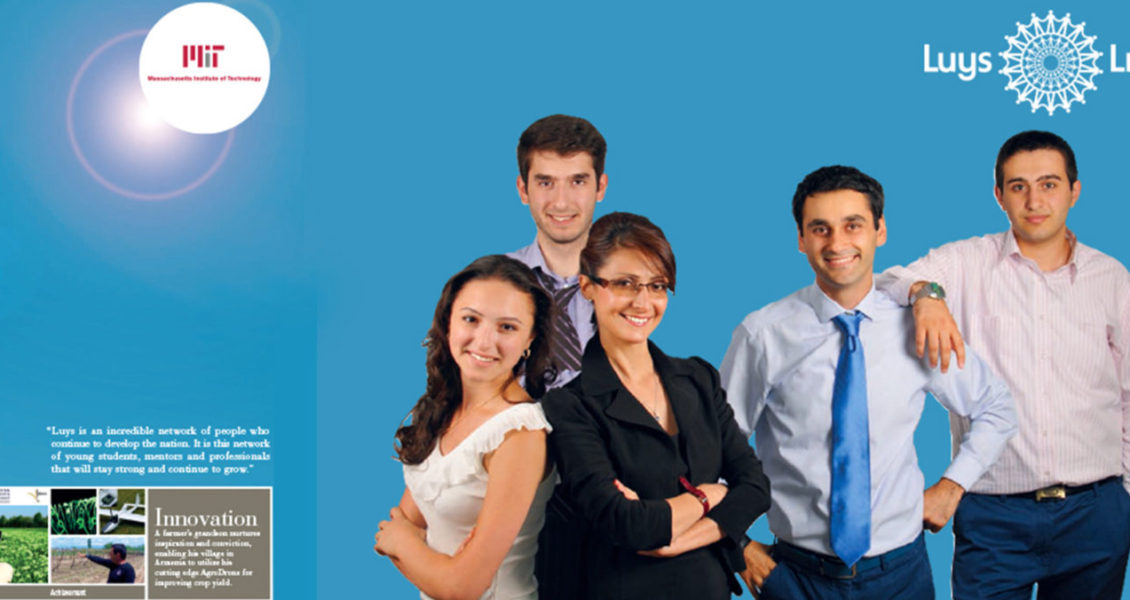 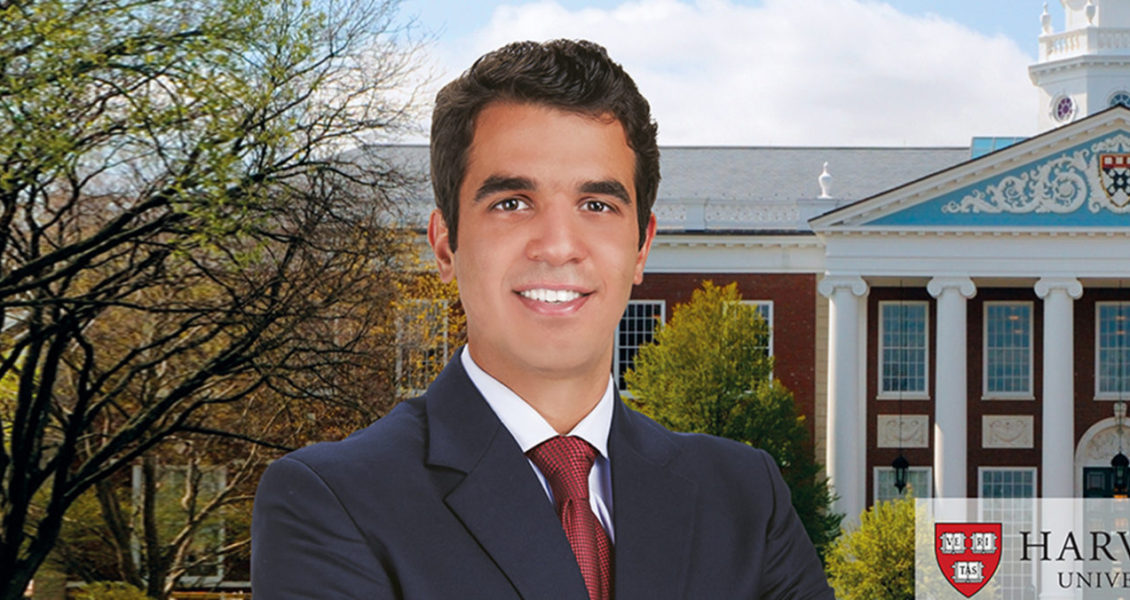 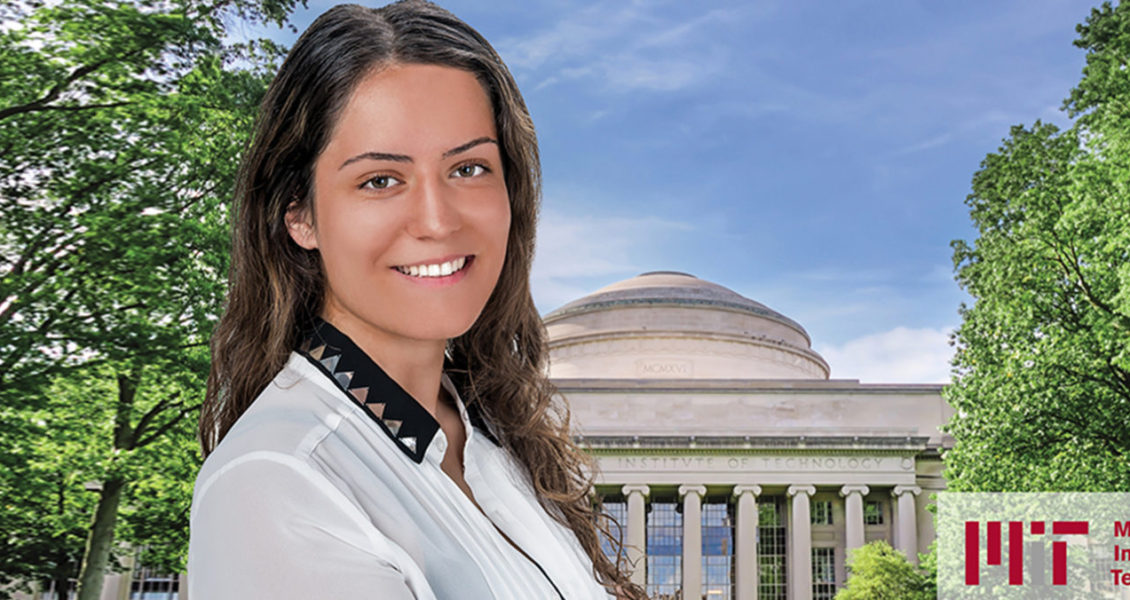 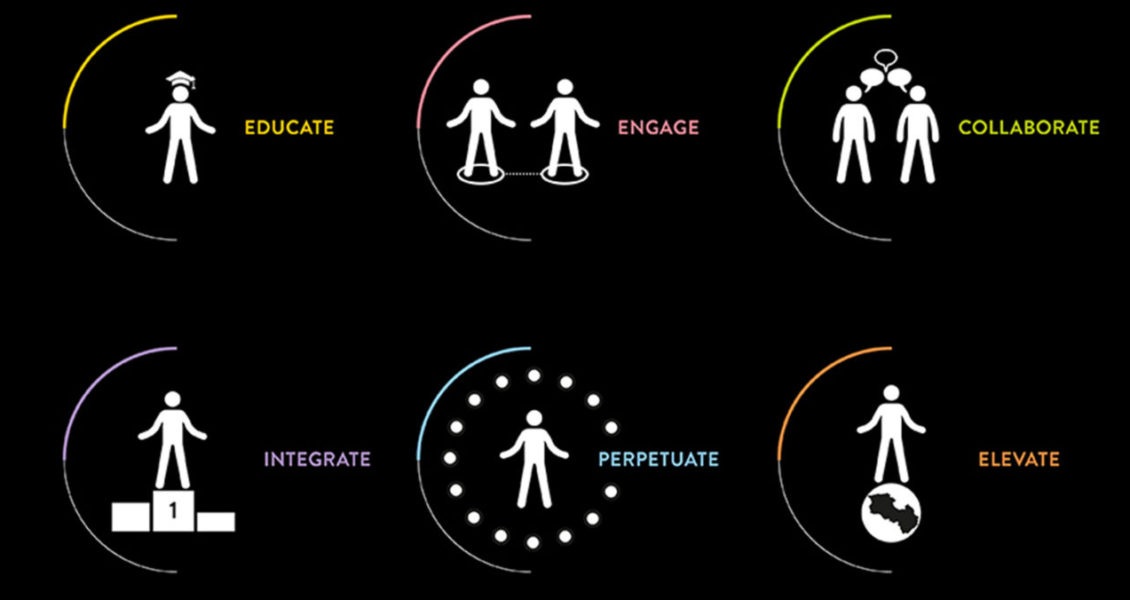 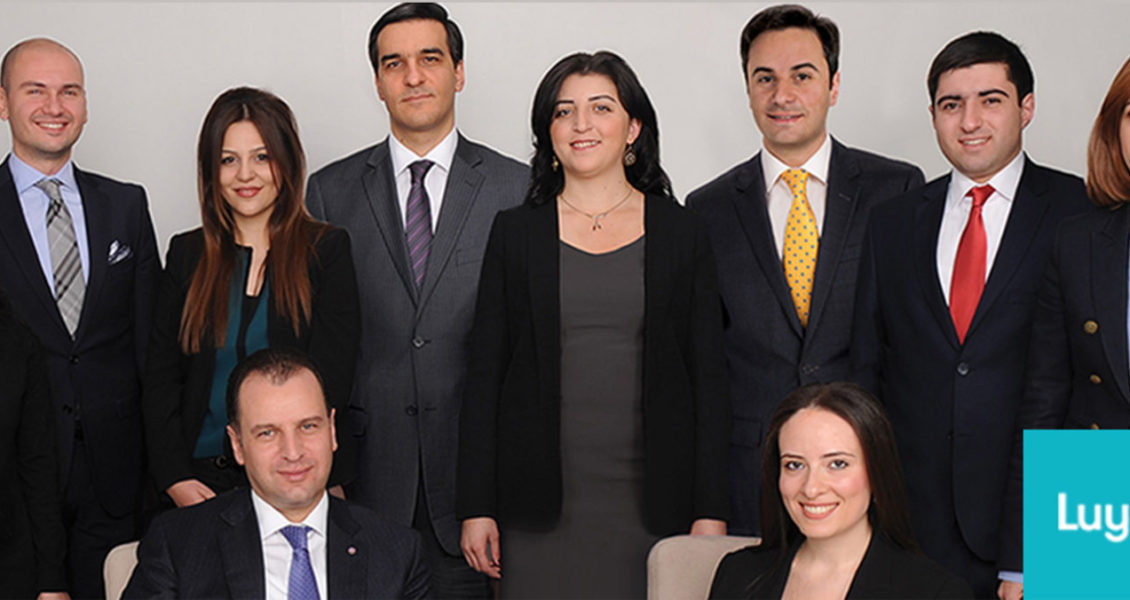 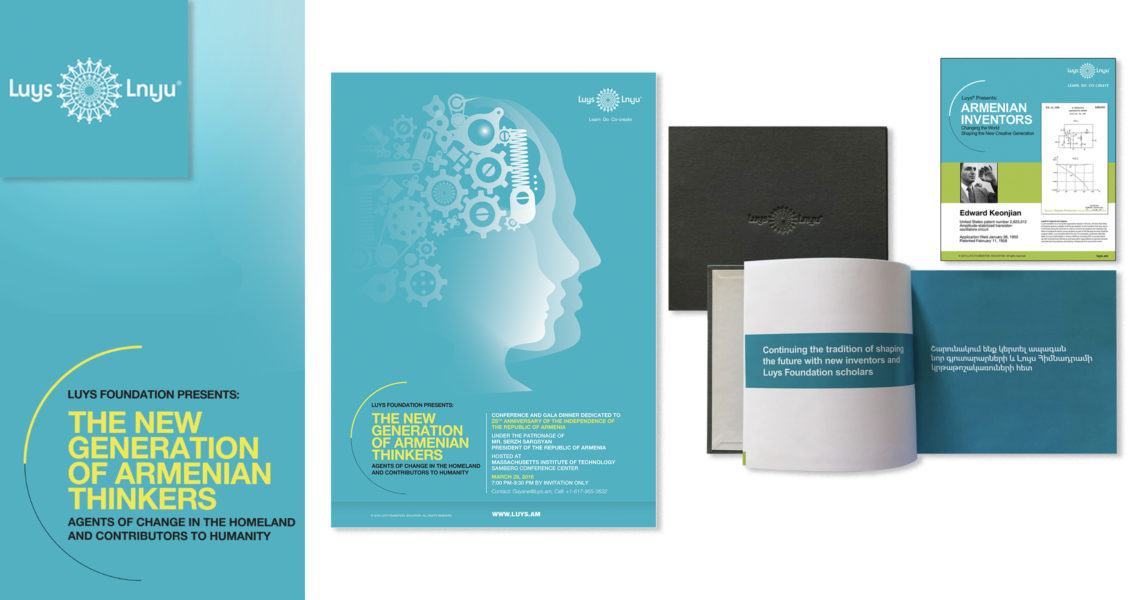 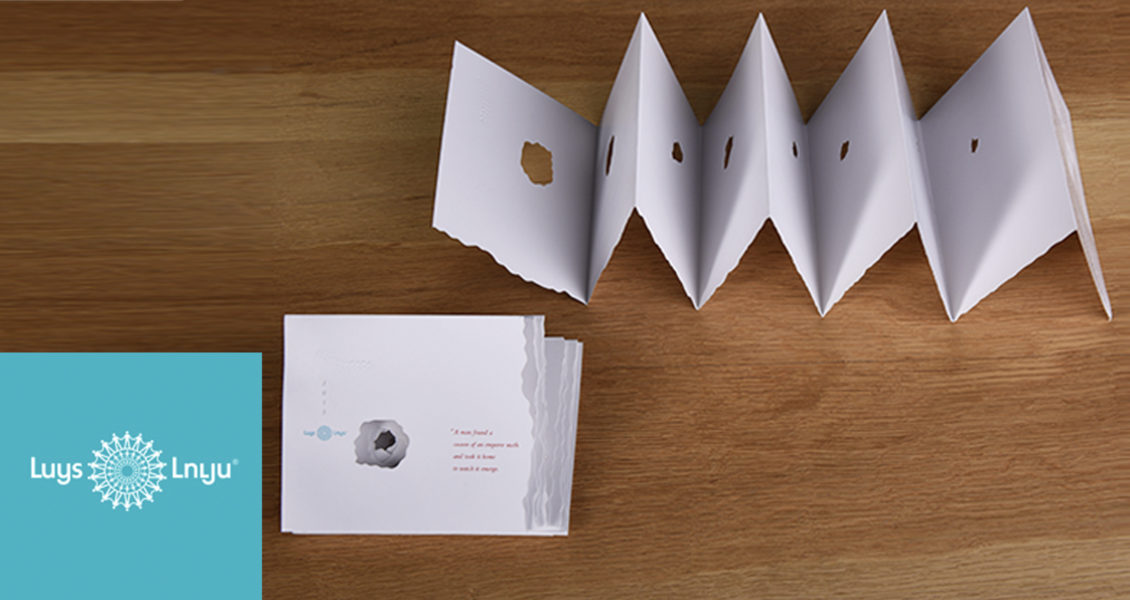 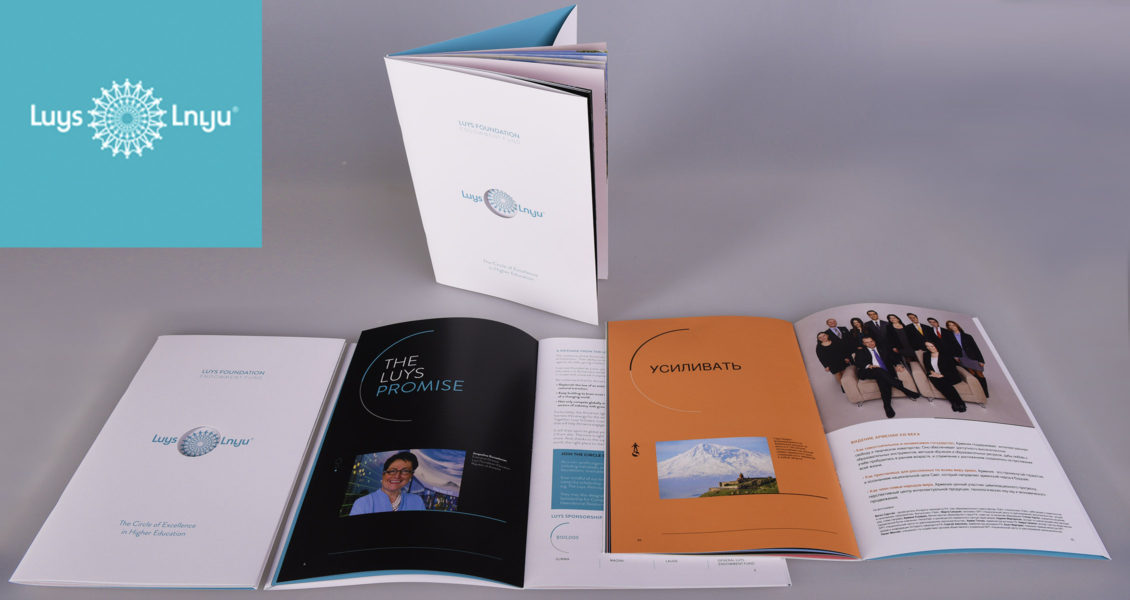 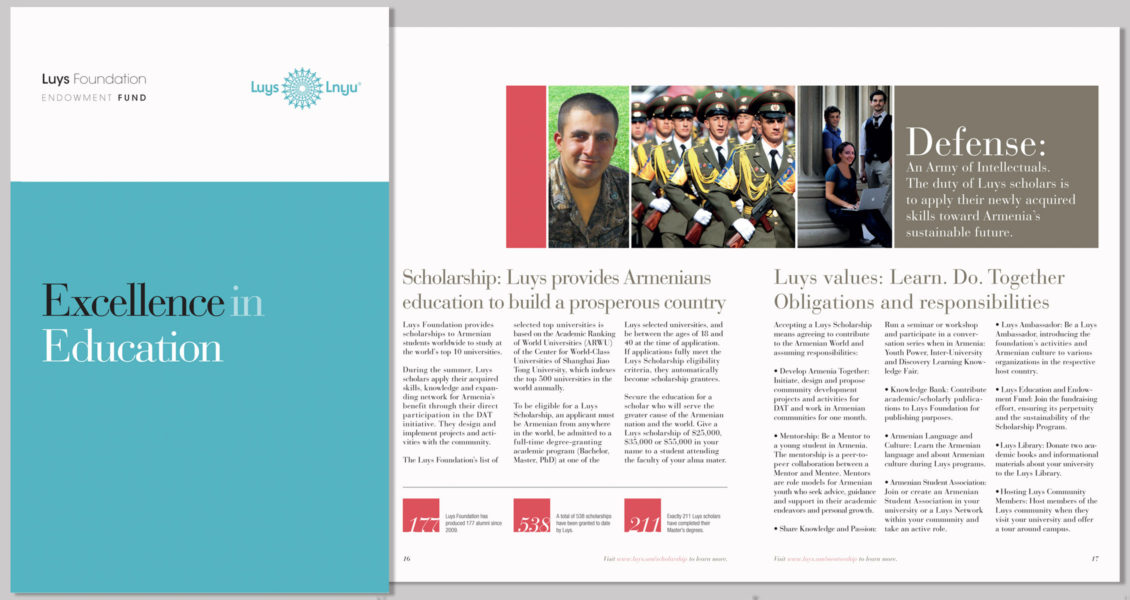 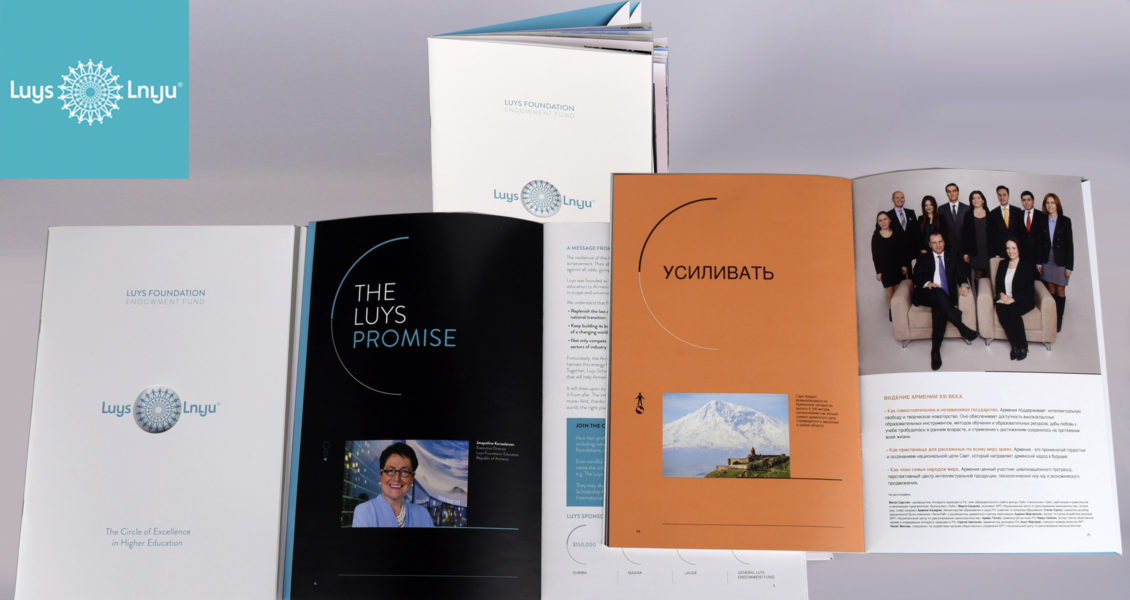 I have always been a big believer in Intellectual Philanthropy - giving people a hand up rather than a handout in my opinion is one of the greatest acts of philanthropy that we can do for our fellow man.

When we share the events that gave us our drive, the trials and tribulations we experienced on our rise to success and the ways we overcame life’s obstacles, we are providing others with a roadmap to success. Some accomplish this through articles, books, speeches, mentoring, et cetera. My form of intellectual philanthropy has always been by donating our agency’s creative services to a cause we strongly believe in and support.

About four years ago when I first met Luys Foundation Executive Director Jacqueline Karaaslanian, I was very impressed with her vision and dedication. The Luys Foundation was a new non-profit initiative founded by Armenian president Serzh Sargsyan and former prime minister Tigran Sargsyan to fund scholarships for students of Armenian descent admitted to the top 10 universities in the worldwide.

Jacqueline had been chosen to helm this project, and the vision that she had set out was a remarkable mix of imagination and resourcefulness in maximizing the program’s impact on the world. She had applied her 28 years of experience working at MIT under the mentorship of giants in education and technology ( Seymour Papert, Marvin Minsky, Nicholas Negroponte, Tod Machover, and Glorianna Davenport), and turned Luys into a powerful hub for unleashing knowledge and talent into the local and global economy. She was not just writing scholarships, she was building an unparalleled network of cooperation, mentoring students for the road ahead, and turning Luys itself into a critical piece of their education by starting the Develop Armenia Program, a summer-long workshop where top students are challenged every summer to think outside of the box and solve development issues facing rural Armenia.
To me it was clear that she was going beyond the old proverb: “give a man a fish and you feed him for a day; teach a man to fish and you feed him for a lifetime”, the old idea being that it is more worthwhile to teach someone to do something for themselves, rather than to do it for them. She was not only teaching them how to fish, but changing the entire ecosystem of the pond. She was attempting to raise a generation of highly educated Armenians geared towards channelling their striving individual ambitions for excellence into a practical and collaborative problem-solving mindset, but there were obstacles ahead.

The name Luys itself means “light” in Armenian, and true to its name, the organization had started to shine in not just its primary purpose, but throughout a brilliant range of noble goals. Impressed and moved as I was by Jacqueline's work, however, Luys was still facing a challenging road ahead in its branding strategy. The sophistication of its approach was at risk of weakening its brand by obscuring Luys’ core mission with complexity.

For a budding network with its sights set on maneuvering the most prestigious academic institutions on the planet (as well as fund-raising ambitions for expanding its capacity to finance scholarships) this risk was serious. A strong core-mission and cohesive brand was to be a critical component in Luys’ efforts to create a cooperative community linking leading institutions in education, government, and business.

When Jacqueline challenged GK Brand to help create a Luys brand that would unify its core goals and values, I jumped at the chance to play a role in this project. I believed in the mission and in its visionary approach, so I donated GK brand's services.

After meeting with Jacqueline and researching Luys’ programs and values, we worked to simplify and update the brand into a cohesive whole.

We were able to distill the Luys mission into three core components: Learn, Do, and Co-Create. “Learn” encompassed creating and uniting a generation of thinkers, “Do” represented the Luys network’s capacity to transition academic achievements into real-world achievements, and “Co-Create” represented the power of collaboration to generate progress for Armenia and the rest of the world. We then elaborated on each aspect of the Luys vision, streamlining its message; with variations aimed at students, parents, and potential donors.

We then created a visual language around these core values to help Luys communicate its rich values with immediate and relatable non-verbal cues. We updated the logo, taking the original image of a globe comprised of students linking arms, and simplified it so that its essence of collaboration could land with a louder impact. To represent Luys’ role as a point of harmonious contact between Armenia and the rest of the world, the name was written in Armenian and English on opposite sides anchoring the logo; its typography hand-lettered for visual balance. We also helped to define Luys’ color, researching its associations and finding the perfect shade of blue to help give the brand a definitive unique value.

To launch this brand strategy, we consulted Jacqueline on the new brand direction and created promotional materials including event posters, business cards, graphics, newsletters, two years worth of brochures, and materials co-branded with leading universities. We developed a guideline that outlined an overarching strategy for representing Luys with a consistent brand message, visually and philosophically.
We also designed a special Endowment Fund brochure targeting donors. We applied the revamped Luys brand to a focused marketing strategy which elegantly aligned the vision of Luys with the potential opportunities that philanthropists could capitalize on with the creation of an endowment fund. Our brochure illustrated the self-perpetuating cycle of progress that could be initiated with proper funding of the Luys mission.

Today, the Luys brand is emulated and admired in Armenia and in leading institutions around the world. As of 2017, Luys has produced more than 450 alumni taking leading roles in the public and private sectors of Armenia and the world, with more on the way. The contributions of Luys graduates are omnipresent, including an astounding 30 startups created directly by Luys alumni since the program’s launch.

Now, Luys finally has a brand vehicle to effectively trumpet its successes to donors and other important partners across academia, government, and private institutions. Luys’ simple yet powerful core identity encompasses the organization's vast array of projects, targeting its ambitious goals and core values in: Learn, Do, and Co-Create.

To this day, it is one of my proudest projects that I have ever participated in. It is a continuous source of gratification to think that we used our branding expertise to help Luys find its place in the world, and an inspiration to see Luys thrive in its ambitions of leveraging the talents of a generation towards building a brighter future.