Terry Glazer and Vasken Kalayjian meet while employed in the advertising and promotions department at NBC in New York.
NBC
The Source
Rockefeller Plaza

Glazer and Kalayjian Design is Founded

Glazer and Kalayjian Design is founded. The agency’s first assignment is to develop branding and promotional materials for NBC’s coverage of the Olympic Games, as well as a number of projects for the Young Presidents’ organization and RCA.
NBC Olympics
BNC
RCA
YPO (Young Presidents’ Organization)

Glazer and Kalayjian expands to a team of four and moves into bigger premises.
Letraset
Nielsen Bainbridge
Burlington

Another move to a larger office space, now with a staff of six (and a shiny new fax machine to wow our Wall Street clients!).

Clients give us the nickname G&K as we go digital with the purchase of the hot new Apple Macintosh Plus computers (with a whopping 256 KB of RAM) and ReadySetGo page layout software from Letraset.
Nielsen Bainbridge
Visa
Chemical Bank
Millsport
GTE
Sprint
Pizza Hut
Super Bowl
Word Series
US Open Golf
Wimbledon

Clients have already nicknamed us “GK Design” so why fight it? GK is added as part of the logo and identity.

While doing a vision quest with a shaman, John P. Milton, Vasken Kalayjian meets former Shell executives Adam Kahane and Joseph Jaworski, who headed Shell’s Scenario Planning team. The book The Living Company by Arie de Geus inspires him to think about the habits of survival in a turbulent business environment through the practice of “Scenario Planning”, along with the work of Pierre Wack, the unconventional French oil executive who was the first to develop the use of scenario planning in the private sector, at Royal Dutch Shell’s London headquarters in the 1970s. Jaworski’s book Synchronicity: The Inner Path of Leadership, with an introduction by Peter Senge, continues to be an inspiration.

This is also the year that a new tradition is born at GK Design: “Helping Hands” provides heavily discounted services to select nonprofit organizations, and especially those focusing on children, women, the homeless and the environment. The first of such clients include:
Ben-Gurion University
The Armenian Diocese
Cystic Fibrosis Foundation
Hadassah
Hippy USA
Lighthouse International
Stilllpoint Farm
UJA-Federation
World Conference of Religions for Peace

GK Design survives the much-hyped “Millennium Bug” panic and rides into Y2K with a bottle of Champagne in hand, looking forward to continuing to serve our clients with world class creative services.

At 8:52 a.m. on a bright autumn morning, the world stops. From our roof, we watch the towers fall. We give blood at the local hospital. We purchase and donate 100 respirator masks to the rescue workers. We volunteer at the Bouley restaurant in Tribeca, preparing meals for fire fighters, police and volunteers at Ground Zero. It doesn't feel like enough. It never will.

GK Design is asked by one of its global clients to manage a global branding assignment in partnership with their agency in Germany. GK is invited to join the German network ComVort, which then becomes the largest independent global network. 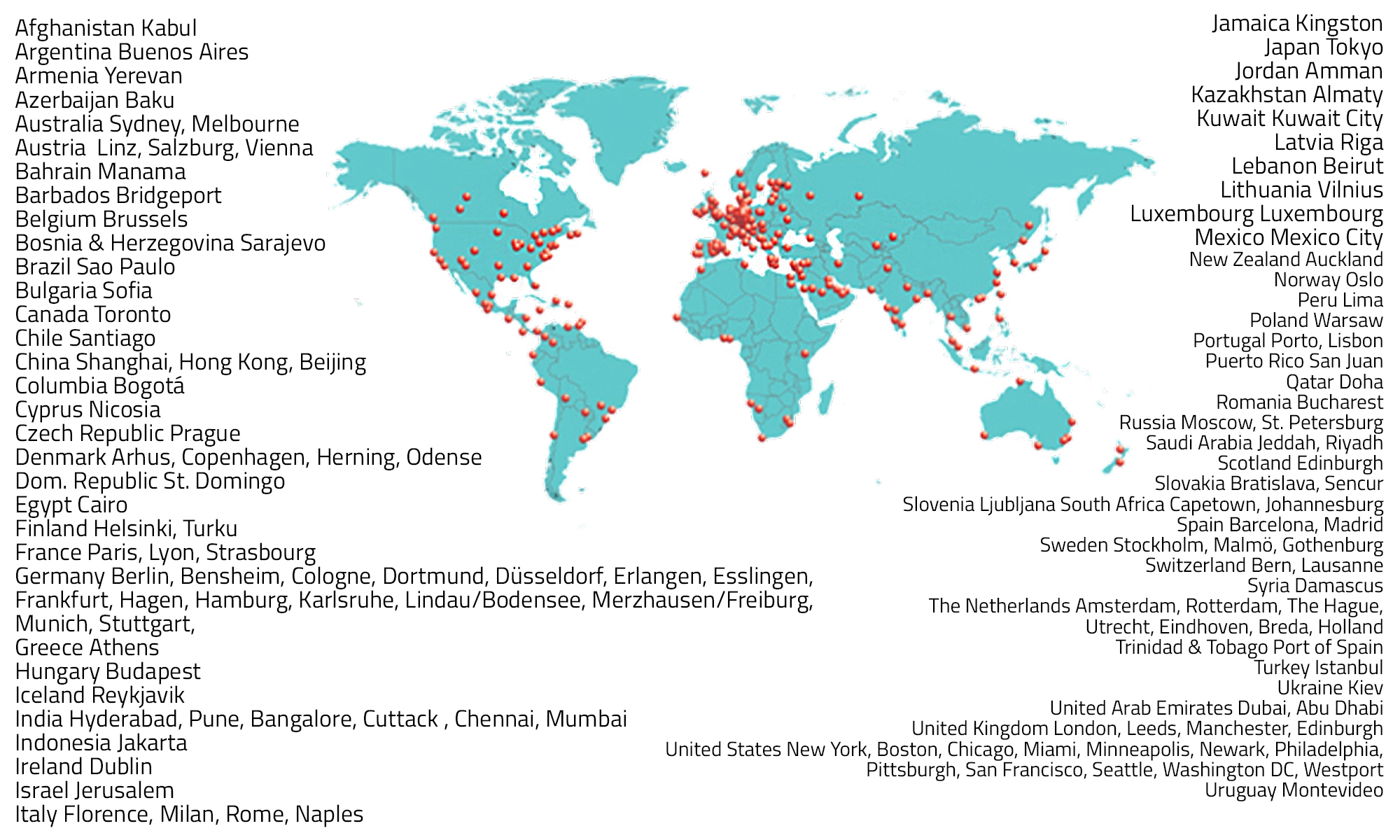 We continue to serve clients globally as part of ComVort, an international group with annual billings of over $US 1 billion, combining over 2,000 top creative minds and serving more than 1,500 clients in 62 cities in 36 countries and in 27 different languages.

Our growth continues through dedicated service, exceptional creativity and a personal approach. The agency is large enough to deliver a full global service, but small enough that clients can pick up the phone and speak directly to one of the partners.
Kia
IBM
Realis
Suzuki
Siemens
Shell
Tropicana
GeoEye
Pepsi
Creo
Renault
Coca-Cola
Lucent Technologies
Prozac
Prochieve
Bic

GK Design opens a second office in Westport, CT, while global branding projects continue to pour in. C. Otto Scharmer’s work Theory U expands our understanding of “Leading from the Future as It Emerges,” while The Connected Leader by Emmanuel Gobillot inspires us to help our clients create agile organizations for people, performance and profit, while thinking about sustainability and the environment.
Baker
Eppendorf
Shell
Coca-Cola
City of Florence
Government of Trinidad and Tobago

Vasken Kalayjian meets with founders of the top nine ComVort agencies in Luxembourg. They decide to leave the ComVort network, which has become too big, and form a prestigious new network, which GK Brand christens “Tribe Global.” Gaudelli in Mexico and Interact in Luxembourg develop the new website, and BJL in Manchester, UK, launches a PR campaign as the new network is launched in London in January 2012. In one year, Tribe Global adds 12 offices in North and South America, Europe, India and Asia. In October, the agencies get together in Mexico City for their first annual meeting.

Vasken Kalayjian meets Jacqueline Karaaslanian of MIT Media Lab to brand her new startup foundation in Armenia. This is the start of a long collaboration. More international projects and place branding follow in this year. Along with Cundari in Canada, GK Brand wins the contract for country branding of Armenia. We conduct a global perception survey in 38 countries.

A visit to the MIT Media Lab sparks a change in the way we think about our work and the way we look at the future, through meetings and conversations with some of the greatest minds of our time, including: Nicholas Negroponte, founder and chairman Emeritus of MIT Media Lab, One Laptop per Child and the author of Being Digital; Marvin Minsky, a cognitive scientist concerned largely with research of artificial intelligence, co-founder of the MIT’s AI laboratory, and author of several texts concerning AI and philosophy; Cynthia Solomon, a pioneer in the fields of artificial intelligence, computer science, and educational computing; Glorianna Davenport, media maker, co-founder of the MIT Media Lab and director of interactive cinema research; and many others.
BNP Paribas
Eppendorf
Pilkington
Healthy Cells
Chi Dancentre
Jean Carrau Decorating
Diageo
Luys Foundation Education
Republic of Armenia
Central Bank of Armenia
Ministry of Economy and Trade of Armenia
Wines of Armenia
Armenia World Expo
Milan World Expo
Canon Camera Division
Sacred Passage and the Way of Nature
The Holly Sea of Etchmiadzin
Gargar Village Armenia
Queens Community House
Ogilvy
Pall
Shell Gas
Stefano Rotolo Handcrafter Shoes
LifeLock Systems
The Apprentice American TV Series with Donald Trump
Baker Corp

The Intergovernmental Panel on Climate Change (IPCC) releases the final part of its Fifth Assessment Report, warning that the world faces "severe, pervasive and irreversible" damage from global emissions of CO2.

The unmanned Rosetta spacecraft's Philae probe successfully lands on Comet 67P – the first time in history that a spacecraft has landed on such an object.

U.S. President Barack Obama announces the resumption of normal relations between the U.S. and Cuba.

The books Bold and Abundance by Peter H. Diamandis and Steven Kotler inspire us to think about “How to Go Big, Create Wealth and Impact the World,” marking a radical shift in how we guide our clients in using exponential technologies, moonshot thinking, and crowd-powered tools to create extraordinary wealth, while also positively impacting the lives of billions. We gain a deeper understanding of how exponential technologies are both disrupting today’s Fortune 500 companies and enabling upstart entrepreneurs to go from idea to billion dollar company faster than ever before, using the power of 3D printing, artificial intelligence, robotics, networks and sensors, and synthetic biology.

Also in this year…
The United Kingdom votes to leave the European Union. The augmented reality mobile game Pokémon Go is released, breaking numerous records in terms of sales and revenue. Swiss Solar Impulse 2 becomes the first solar-powered aircraft to circumnavigate the Earth. The 2016 Summer Olympics are held in Rio de Janeiro, Brazil – the first time the Games have been hosted by a South American nation. Global CO2 levels exceed 400 ppm at the time of year normally associated with minimum levels – believed to be higher than anything experienced in human history. Donald Trump is elected the 45th President of the United States after running a campaign widely characterized as populist.

Vasken Kalayjian begins writing a series of how-to, step-by-step guidelines to help startups and entrepreneurs, and this becomes Brand Real: The Startup Entrepreneurs' Guide to Effective Branding and Building Values-Based Organizations. Combining more than 30 years of experience and 21 experts from various fields, the book is published a year later.
Faem
Endoura
Luxembourg
City of Madrid

Also in this year…
Trump himself dominated the headlines and social media throughout 2017, and when he didn’t like the headlines, he let us know... And the U.S. withdrew from the Paris Climate Agreement. 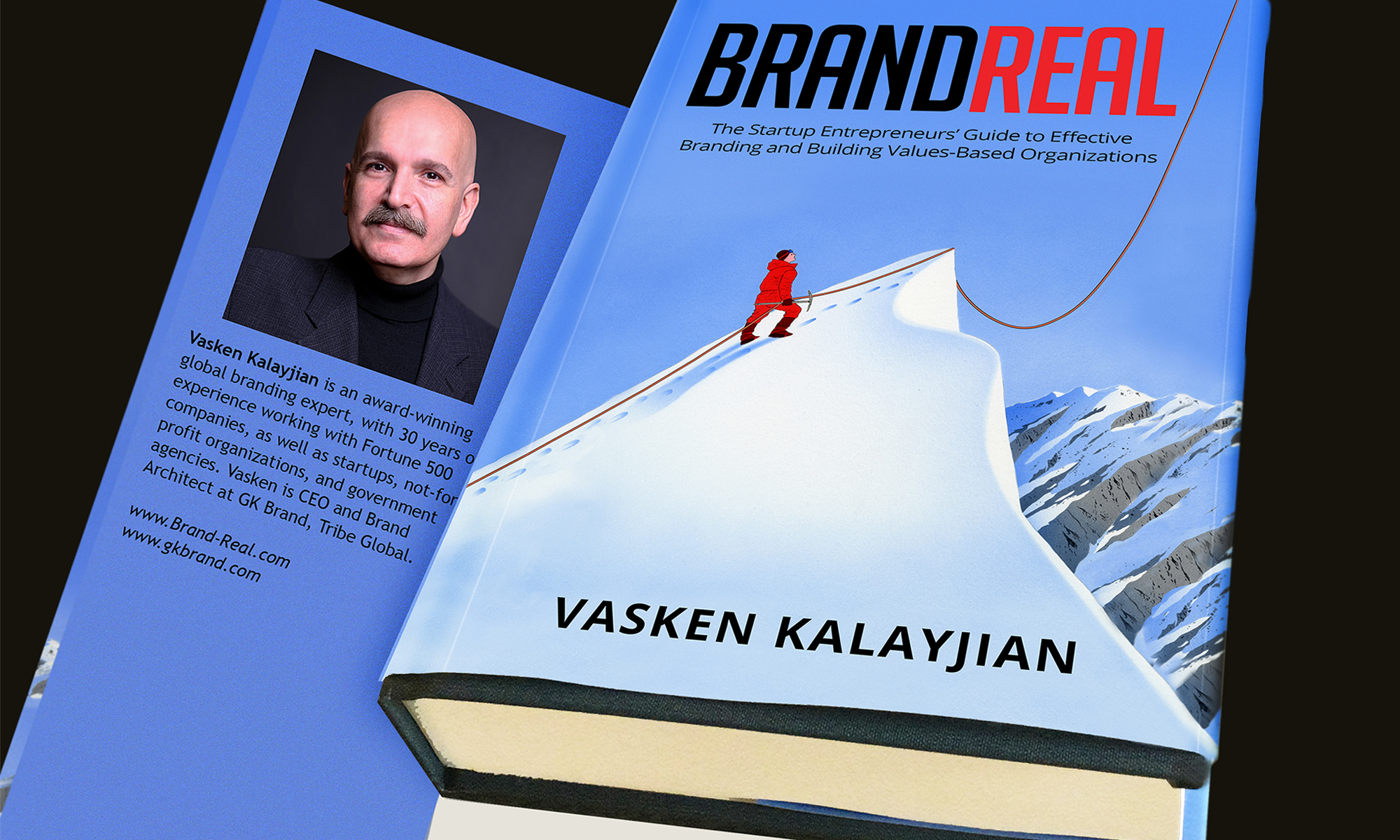 Brand Real: The Startup Entrepreneurs' Guide to Effective Branding and Building Values-Based Organizations is launched on April 9 on Amazon, Kindle and Barnes & Noble.

Vasken Kalayjian joins Learning Learning Architects, LLC, as a co-founder, President and Global Head of Design and Branding, working on a major project designing the city of the future.

Also in this year…
January 3 – President Donald Trump boasts on Twitter that his nuclear button is "much bigger" and "more powerful" than that of North Korean leader Kim Jong-un.

The National Oceanic and Atmospheric Administration (NOAA) reports that 2017 was the costliest year on record for climate and weather-related disasters in the United States.

Facebook founder Mark Zuckerberg receives a formal request from the British government to answer questions regarding Cambridge Analytica and the "catastrophic failure of process" behind the data breach.

By a majority of 23–12, the California State Senate votes to approve a bill that would reinstate the net neutrality regulations repealed by the Federal Communications Commission in December.

Scientists release the first ever image of a black hole. Scientists announce a new therapy that looks likely to benefit 90% of people who have cystic fibrosis, and a new vaccine protecting people from the Ebola virus. The director-general of the World Health Organization calls the progress in vaccine development “a triumph for public health, and a testimony to the unprecedented collaboration between scores of experts worldwide.”

Women in Latin America instigate worldwide rallies against the continuing pandemic of violence against women. Young people around the world are mobilized to demand action on climate change, and young people in the U.S. continue to demand progress on gun law reform. Reports this year show that Americans gave $428 billion to charity in 2018: 2.1% of the country’s total economy and more than the entire national economy of Norway.

The U.S. women’s national soccer team inspires our nation by winning the World Cup — and then using their celebrity to campaign for gender equity on the soccer pitch and beyond.

We begin our new work with a new think tank of like-minded diverse thinkers from Learning Learning Architect, Harvard Graduate School of Architecture, INVEVIA and MIT scientists to design the city of the future.

GK Brand partners with Learning Learning Architects to create a new company, Brand Real Global, as the design and branding division of LLA.

During the Covid-19 pandemic we have been helping several friends with their branding and web presence. While our professional life has been dedicated to our work for multi-nationals and global brands, since Vasken Kalayjian published the book Brand Real: The Startup Entrepreneurs’ Guide to Effective Branding and Building Values-Based Organizations, we have made a committed and passionate effort to support startups and entrepreneurs, consultants and smaller businesses to survive and thrive; especially during these very challenging times.