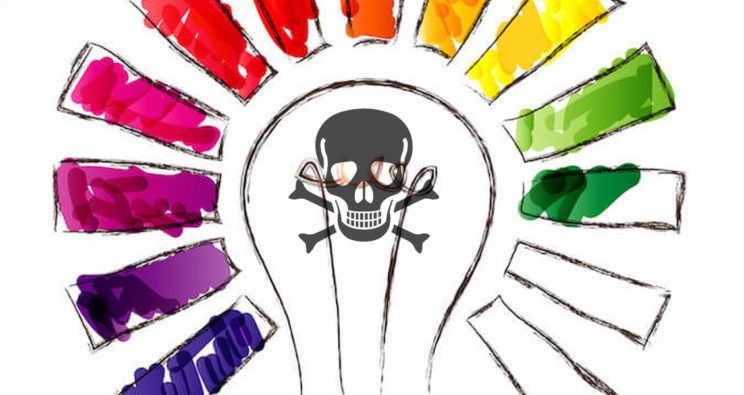 Who Killed Creativity?: …And How Do We Get It Back?

Andrew and Gaia Grant, authors of Who Killed Creativity? And How To Get It Back, introduce us to some insidious professional killers and recommend ways to stop them. Available on Amazon

A crime scene investigation is underway to investigate a death. This is not an average death, this is the death of creative thinking. You see while IQ levels have been rising owing to enriched environments (the Flynn effect), creativity scores have actually been falling over time. After analyzing up to 300,000 Torrance scores from children and adults (the gold standard in creativity measurement), it has been discovered that although creativity scores rose along with IQ scores until 1990, creativity scores have since dropped significantly.

This decline is also evident across an individual’s lifespan. Research into the decline of creativity has led to some startling conclusions. In a sample of 1500 children aged 3–5, 98 percent ranked as “geniuses” in divergent thinking; in children aged 8–10 the figure fell to just 32 percent; and by age 13–15 it had declined further to a mere 10 percent. In other words, children become less creative as they grow older. Moreover, in a control test of 2000 adults (aged 25+), only 2 percent ranked as geniuses.

When, more than 50 years ago, American psychologist E. Paul Torrance began identifying the key elements in creative thinking and assessing individuals according to these criteria, he had no idea what these assessments would eventually reveal. Torrance and his colleague Garnet Millar, who followed individuals over time, found that the qualities they identified in young children were major predictors for creative professional success. By looking at the lifetime data Torrance and his associates collected, and reanalyzing it, it was found that the correlation to lifetime creative accomplishments is nearly three times stronger for childhood creativity than it is for childhood IQ.

It’s time to identify and deal with the creativity killers. Through our surveys of thousands of workshop participants from a range of backgrounds and experiences over more than 20 years, we have narrowed down the list of suspects to 7 key profiles. By recognizing and managing these effectively, we believe it will be possible to revive and nurture creative thinking. Allow us to take a creative approach to interrogating these murder suspects:

Also known as bully oppressors, the control killer profile tends to stifle creative thinking through suppressing the ability to think freely and independently. When systems are set up that restrict freedom of thought, and when individuals perpetuate those systems through controlling approaches and actions, creativity has no room to flourish. Like the real mafia, the control killers can operate through a coercion which instills fear, which can then itself become a killer.

Recognize areas in your life that may have become suppressed, and identify why this has happened and how this can be dealt with.

Develop a mindset that is open to exploration.

An often unsuspected killer that can intimidate the most intrepid, this highly prolific villain thrives on anxieties about trialling new ideas and the possibility of failure. A childlike ability to take risks and risk failure without fear is critical to creative thinking, but when anxiety intervenes the fear can be crippling. It’s not surprising that one of Apple’s guiding innovation principles is to “fail wisely.”

Have the courage to face fears of possible failure and uncertainty. Learn to see them as an important part of the creative process.

This seductive assassin dispatches its victims by exercising a stranglehold of real or perceived expectations. The faster pace of life, a greater reliance on technology, and significantly increased communication speeds, have all contributed to its prevalence. Under pressure, the body’s instinctive response is “fight, flight or freeze.” The constant adrenaline need for the “fight” response can lead to dangerous physical and psychological symptoms and ultimately literally shut down the brain, and the “flight” and “freeze” responses can lead to an inability to face up to the pressure and deal with it effectively. By using up precious mental energy at the primitive brain stem simply for survival, thus limiting access to the pre-frontal cortex where real creative thinking can occur, this killer restricts the ability to be creative.

Identify your own typical responses to pressure.

Stand up to pressure – recognize that you have the power to stay in control of the impact of external circumstances, and find specific ways to balance your time and energy more effectively.

Be proactive in designing your life to control pressure: e.g., try drawing up a fresh schedule for yourself that gives you the time and space to do the things you would like to do as well as fitting in the things you need to do.

Prepare a platform to unleash your imagination – trial “brain teaser” exercises designed to stretch your mind into exploring a range of possibilities.

Also known as isolating killers, those fitting the insulation profile employ a lethal combination of segregation and homogeneity that can lead to biased conformity. They quarantine their victims from different ideas and information, denying them exposure to a diversity of opinions and therefore access to potentially life-saving devices. In the same way that placing prisoners in solitary confinement limits their experiences and restricts their brain capability, insulation confines the victims’ experiences and limits their capabilities over the long term. When information sources are limited in content but overwhelming in quantity, the brain simply can’t cope, and will stick with the safe secure options rather than trialling creative new ideas. A lack of diversity in teams and organizations at all levels can also limit creativity.

Deliberately expose yourself to different people, different sources of information and different ideas. Be open and receptive to opinions and ideas that don’t match your own– ensure there is receptivity to apparently opposing perspectives.

Learn how to master conscious awareness, so that you can access difference parts of your own mental capacity and not just that parts that you usually access (try brain training exercises that utilize different capabilities, eg to access both ‘left’ and ‘right’ brain functions.)

Murderers fitting the apathy profile lack motivation and drive. These villains are often themselves victims of systems that have deadened their will to succeed, and the profile can often be detected in those with cutting sarcasm and acerbic cynicism. An apparent lack of motivation, concern or passion can be twisted into a deliberate ‘stab in the back’ or a ‘cutting remark’. A major finding Malcolm Gladwell reached through his research was that, rather than simply a genetic inheritance, successful genius is cultivated through a potent mix of lucky circumstance and sheer hard work, so apathy has no place in the process of creative development.

Assess your own levels of engagement in what you do, and detect where there might be a lack of engagement. Recognize sarcasm or cynicism, and identify what the root cause of these might be.

Challenge your old, conservative habits and behaviors with new approaches–even if they are initially uncomfortable. Draw up a chart to list in columns: “The way I usually approach what I do,” and “A new approach”

Find ways to connect with your passions and use these as a base for action.

With a stubborn and often headstrong approach, killers fitting the narrow-minded profile ensure their dupes remain trapped in their standard, familiar patterns of behavior. Victims are unwitting casualties of their own habitual ways of thinking and behaving. Narrow-mindedness leads to convergent thinking, and the full creative process requires divergent thinking before a specific focus is chosen. Human thought patterns tend to slip into these standard channels, or set ways of thinking, if they are not regularly challenged. The brain seeks to organize its thoughts–often in response to incoming information–into temporarily stable states that succeed each other to give a sequence. When a sequence or pattern is repeated, it becomes a thought-pattern or mindset that channels future thoughts more easily along the same path. It thus becomes a habitual standard way of looking at a situation or problem. Blinkered expertise, prejudice and groupthink are all examples of the way narrow-mindedness can manifest itself.

Embrace “creative innocence”–try putting aside any notions of expertise, recognize any biases or prejudices you may have developed, and approach a situation as a child would instead.

Practice divergent thinking through exercises that encourage this.

Put yourself in others’ shoes to open up different ways of thinking. E.g., think of a problem that has to be solved, identify your usual action, then think about the different paths others in your situation might take. See if you can come up with several different possible ways the problem could have been solved.

Another stealthy killer which operates like a chemical weapon, this profile type subtly perpetrates destruction through a toxic mindset. Sufferers of the disease initially communicate in negative ways, and eventually undermine their own and others’ attempts at creative thinking. Pessimists tend to blame themselves when things go wrong, becoming more reluctant to try again with each negative experience. Most people would most likely be unaware that as humans we have developed a natural bias against creative thinking, which interferes with our ability to recognize a creative ideas when we come across them, so it is important to recognize the profound influence of this creativity killer profile and deal with it.

Take up a new hobby or sport, and don’t give up until you have mastered it.

Learn the art of positive self-talk and optimistic thinking and language.

Reword or rework limiting language and experiences into positive outcomes. Try keeping a diary of the things that happen each day – then track how many of these were framed in a positive way and how many in a negative way. Practice reframing the negative experiences.

There are three powerful techniques that enable you to get outside the routine thinking that is trapping you and to come up with creative ideas. These can be called “juggling assumptions,” “deliberate provocation,” and “tapping the random.” You can read more about this in
Brand Real: The Startup Entrepreneurs’ Guide to Effective Branding and Building Values-Based Organizations. Chapter 26 How to Innovate

Gaia Grant and Andrew Grant are the founders of Tirian International Consultancy and are the authors of Who Killed Creativity? (Jossey Bass / Wiley), newly released in the U.S.